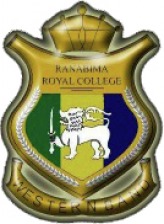 Our western band was formed during the period of the Principal Mr.S.M.Keerthirathne. The first band leader of the band was U.P.C.P. Udagedara.

Within a short period of time we were able to become a popular band in the year 2001. We became the first in the central province band competition. K.L.D. Sujeewa was the best band leader of the inter school competition organized by the Girls High School Kandy. We participated in the “Drums And The Steps” competition organized by Dharmaraja College Kandy in 2003. We were able to win the first place in the central province. In addition, we participated at the ceremony held to Commemorate the Independence day in the Kandy. We also participated in the competition conducted by Pushpadhana Girls College in the year 2005.

The western band of Ranabima Royal College participated In many welcoming inaugural ceremonies also thus achieving a new face. Period of past time had 10 leaders and at present the leader is Chathuranga Deeshappriya Wijerathna , Mr. M.R.P. Mayadunne is the master in charge.