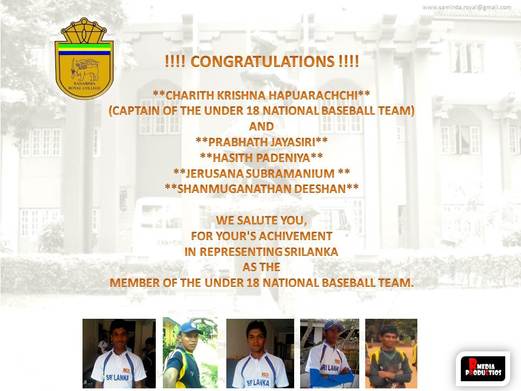 ** CHARITH KRISHNA HAPUARACHCHI**
(CAPTAIN OF THE UNDER 18 NATIONAL BASEBALL TEAM)

WE SALUTE YOU,
FOR YOUR'S ACHIVEMENT
IN REPRESENTING SRILANKA
AS THE
MEMBER OF THE NATIONAL BASEBALL TEAM.
** "The selection matches for the 6th junior south asian WUSHU tournament wich is proposed to hold in china was held @ Ashoka Vidyalaya,Colombo on 25th of july 2011 and The Ranabima Royal Wushu playerd found there way to the gold and four of them were selected to the Srilanka wushu pool"

Seven playerd partipated in this tournament and one of them found the way to gold, two for the silver and one for the bronze. 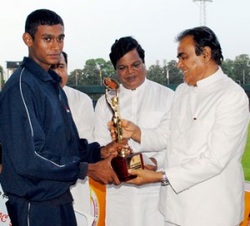 Randeniya set a new meet record in the 110 metres hurdles, under-17 age
group, finishing the event in 14.25 seconds.